Mike Tyson punchout screenshot, boxing challenger character list with everyone has a plan until the get punched in the face quote t-shirt. Digitally Printed on soft 100% ring-spun cotton premium Soft Style quality Tee. Size XXL is Heavy Cotton. Mike Tyson's Punchout was released in 1987. It become a cult classic because it is the most iconic boxing videogame ever created. A few of the characters that appear in the game are Little Mac and his trainer Doc Louis. The referee is Mario from super mario bros. King Hippo, who wore a bandaid over his stomach, Glass Joe,  Mr. Sandman, his quickness makes him hard to fight. Piston Honda, the Japanese boxer with the headband.  Bald Bull with the bull charge. Soda Popinski, The Russian. Super Macho Man, the muscular boxer. Don Flamenco, who danced around the ring with a rose in his mouth. Von Kaiser who is known for his mustache and his very predictable uppercut. 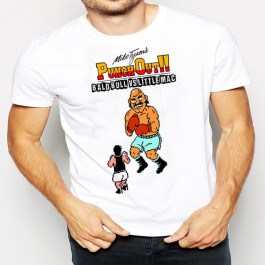